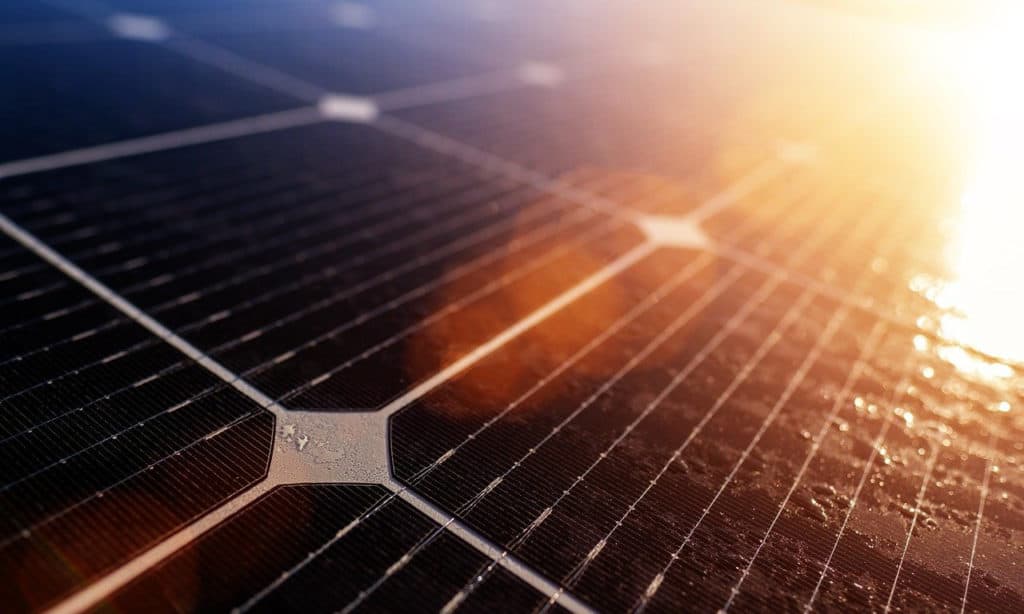 I’ve been studying solar panels for a while now since I’m thinking of installing a solar system. I’ve done a lot of research into the subject, and I’m becoming something of an authority on solar technology. Then, the other day, a question suddenly came to me that stumped me.

Just how hot do solar panels get?

I didn’t have the answer to this particular poser; I just hadn’t thought about it. The question has some important practical implications as well. I know that some electrical systems work less well at high temperatures. So it’s important to understand how hot solar panels become in order to look at whether this affects their efficiency.

Also,  I just wanted an answer to the question because I’m curious. Perhaps you are too? Well, thoroughly research the subject now, so let me explain it to you.

What makes a solar panel hot?

This might seem like an obvious question, but pause to think about it for a moment. Obviously, solar panels get hot because they are exposed to direct sunlight. Leaving things in the sun get them hot, right? But if solar panels are designed to convert all of the energy from the sun to electricity, then why is some of that precious energy wasted on making the solar panels hot?

The sun releases its light energy at many different wavelengths and solar panels can only absorb certain of those wavelengths. Some of this heat energy that a solar cell can’t absorb causes your solar panel to heat up.

The photovoltaic cells that make up a solar panel are designed to react with light from the sun, not heat. It is this light energy that solar cells convert into electrical energy, but they don’t do anything with heat energy, leaving it to heat up the solar panel.

Also, solar panels are made up of other things, as well as solar cells. The panel has a metal frame and a protective glass covering. These parts of the solar panel also heat up under direct sunlight.

At what temperatures do solar panels work most efficiently?

Solar panels convert sunlight to electricity, and electrical systems work best at colder temperatures. This means that the colder it is, the better the solar panel works (as long as it‘s exposed to direct sunlight).

Does heat affect the performance of solar panels? 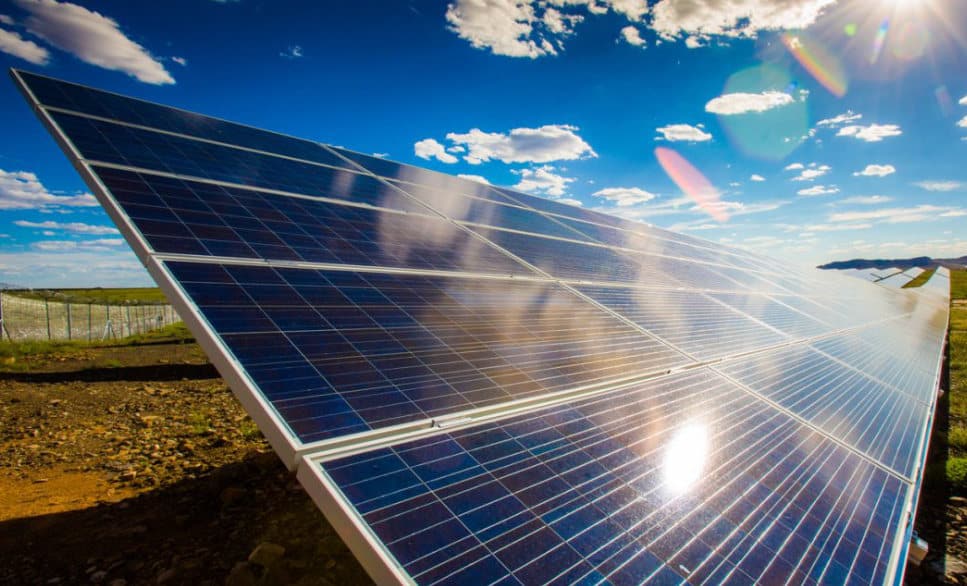 Solar panels are, by their very nature, systems that need to withstand high temperatures. Since you place solar panels to maximize exposure to the sun, they will inevitably be exposed to a lot of heat.

But solar panels are most effective at temperatures of up to 77 Fahrenheit (25°C ). When solar panels get hotter than this, they begin to lose efficiency. This loss of efficiency varies from panel to panel.

Luckily this loss of efficiency is something that gets tested for each panel and it’s easy to find out how much heat affects a particular solar panel by looking at its temperature coefficient.

Why does high temperature reduce the efficiency of solar panels?

Solar panels are made up of solar cells. These solar, or photovoltaic, cells contain silicon. This element is a semiconductor, a substance that can transmit and produce electricity under certain conditions. 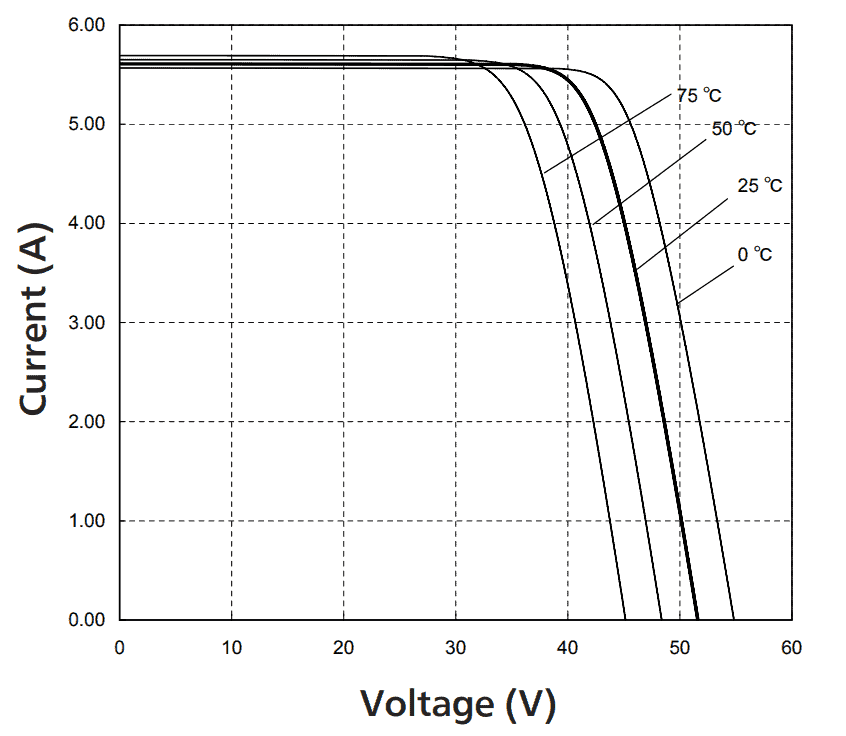 What is the temperature coefficient of a solar panel?

All solar panels are tested and given a temperature coefficient rating. This rating applies to temperatures above 25°C (77°F)

Here’s an example of how a temperature coefficient is written -0.32%/°C

For this particular solar panel, every increase of 1°C beyond 25% results in a 0.32% efficiency reduction. If you place this panel in an extremely hot environment and operate it at 122°F, that would result in an 8% loss of efficiency.

While that’s a significant loss, it’s important to note that this example uses a very high temperature. Unless you live in the desert somewhere, it’s unlikely that your solar panel will ever reach this heat.

The reduction in energy produced at high temperatures is relatively small, but these small differences in efficiency can add up over time to significant differences in electricity production. Here’s a video going into more detail on how this works.

Solar panels with a low-temperature coefficient lose less energy at higher temperatures. These low-loss units are generally premium brand solar panels, and they come at a premium price too.

The premium brand solar panels with low-temperature coefficients often come with other benefits like better energy production efficiency and smaller size. So there are other factors to take on board when you decide whether to buy a relatively cheap or expensive solar panel.

Can heat destroy a solar panel? 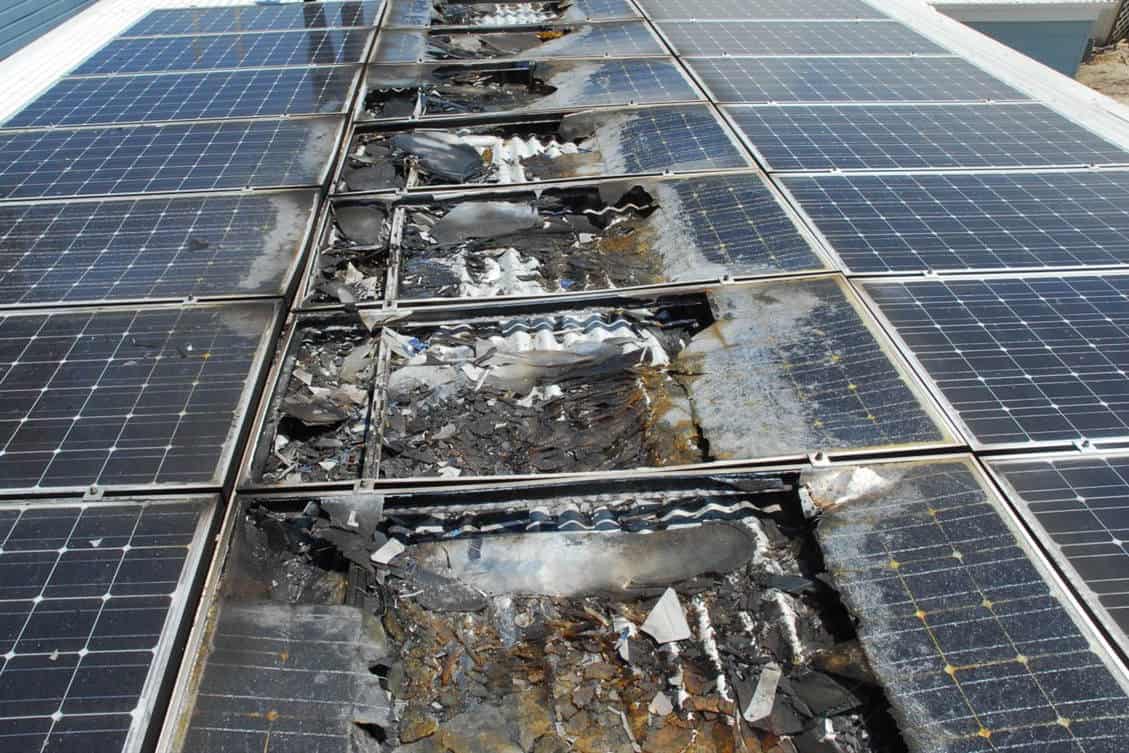 Manufacturers of most solar panels give them a maximum temperature recommendation. This temperature is typically in the region of 185°F. Theoretically, you can damage a solar panel if you operate it at temperatures above this maximum.

But in practical terms, under regular operation, there is no way your solar system will ever experience this kind of temperature, so you don’t need to worry about heat damage to your solar system except under very extreme conditions.

How to control the temperature of your solar system?

You can’t very well put your solar panels in a shady place, can you? It would kind of defeat the object since capturing maximum sunlight is what solar systems are all about. Thankfully there are several things you can do to help you to reduce the temperature of your solar system so that it runs at peak efficiency. 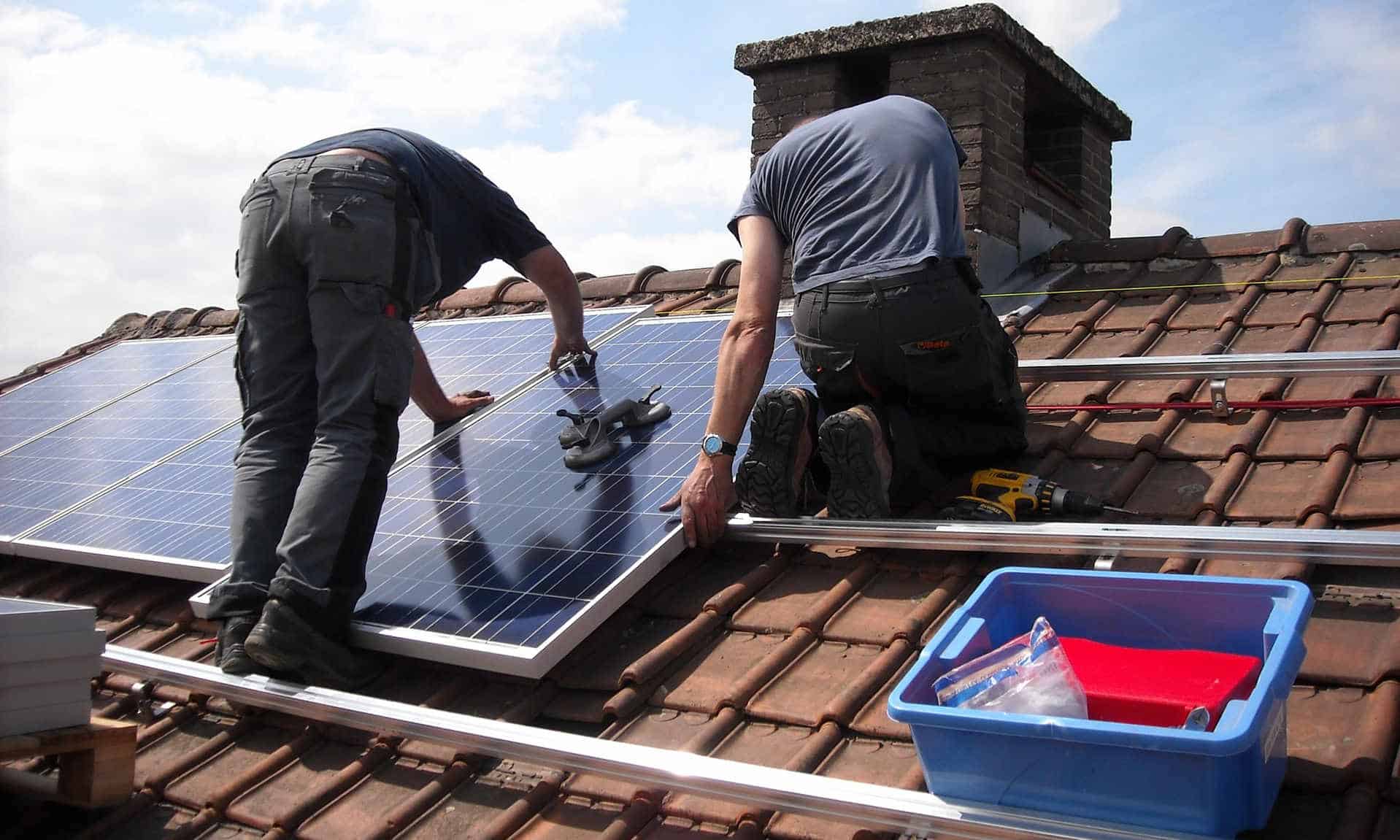 Solar panels cooldown by dissipating their heat into their nearby environment. Typically when you have your solar system installed some space will be left between the panels and your roof tiles. This space is vital because air and, in particular, moving air is a great cooling system.

Leaving a space between your solar system and your roof tiles allows moving air to act as a natural cooling system that lowers the working temperature of the solar cells.

If you have your solar system installed professionally, you can expect the installers to leave the correct amount of space between the panels and the roof. Just make sure you leave this cooling space between your roof and the system if you install it yourself. A good working figure to use for this gap is around 6 inches.

Using water as a coolant

when you put water onto a hot surface, it evaporates away and cools down the surface. This is why we sweat to cool ourselves down. This principle can be applied to solar panels too. Water irrigation systems can be used to periodically wet and cool solar panels in particularly hot environments.

This wetting of solar panels has the added benefit of removing any dust or other matter from them, improving their efficiency. 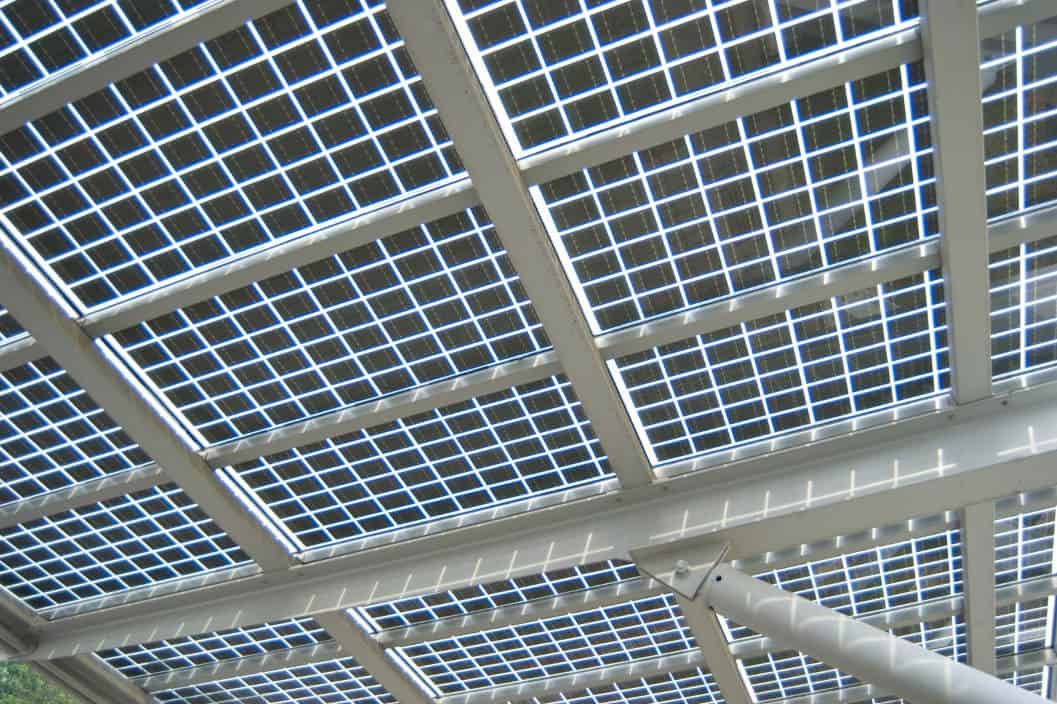 But, (and it’s a big but) right now, thin-film panels are much less efficient than conventional solar panels. This means that while they lose less energy at higher temperatures, they produce much less electricity in the first place.

Thin-film panels are a promising technology for the future that at the moment, their heat efficiency doesn’t compensate for their low electricity production.

We’ve seen that because of their exposure to direct sunlight solar panels can get very hot. But since this is what they’re designed for, it’s unlikely that high temperatures will ever damage your solar panels.

If you have any comments or questions, then please share them with us.