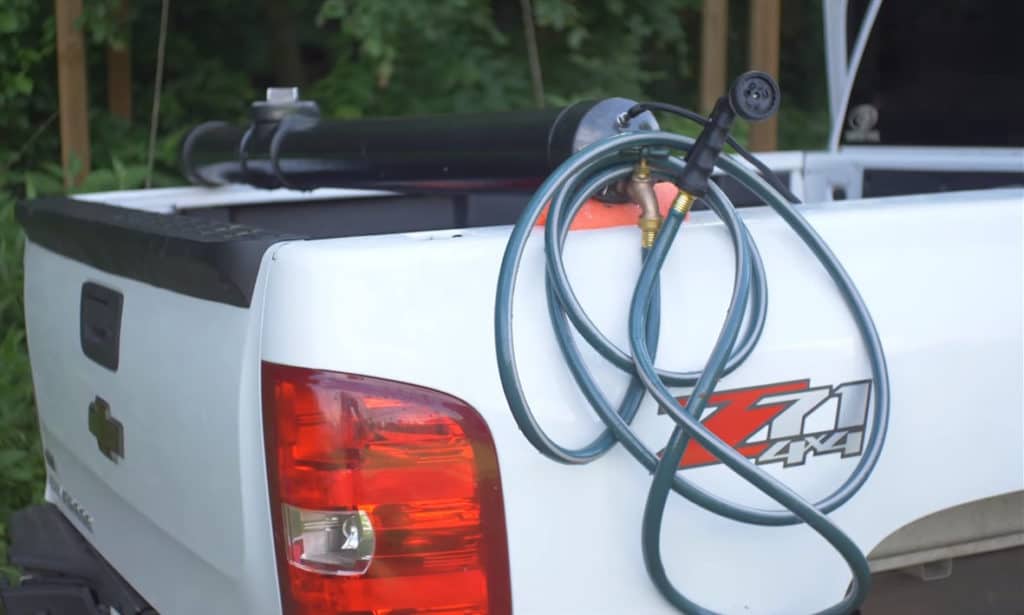 Did you know that you can easily create amazing solar shower DIY plans, from solar bags shower to roof rack shower ideas? You just need to get cheap materials from Amazon, and you’re good to go!

Some of the best DIY plans are usually ideas you get online. Of course, you can also get some amazing ideas from friends and relatives, or when traveling. But online platforms have some terrific solar shower ideas that stand out.

I did some digging myself and came up with simple, rusty yet gorgeous solar shower plans, and I’d like to share some of them with you.

But before we go ahead, it’s important to understand that most of these solar shower ideas are vastly different, and you need to pick an idea that befits your specific needs.

For instance, where are you located? What’s your budget? Is your solar shower mainly for outdoor or indoor use? How many people will be using the solar shower – that is, how big is it? Are you a camper?

I mean, there are so many questions you need to take into consideration. You need to know how solar shower works, and that’s just the beginning. You’ll also need a few tools and materials to build some of these DIY solar showers.

The Solar Shower Ideas in a Nutshell

If you find this article a TLDR, just know that most solar shower ideas are mainly in three categories:

With that said, let’s take an in-depth look at the best solar shower DIY plans.

NOTE: All these materials and tools are available on Amazon.com for very cheap.

The first and simplest DIY is using a bucket. It’s not only simple to Do-It-Yourself, but it’s also probably the cheapest and quickest way to make a solar shower.

Here, you’ll need a bucket, preferably a 5-gallon one. You’ll also need a drilling gun to make small holes on the bucket. It’s best to go with the smallest drill bit, so you don’t lose much water when taking a shower.

If you aren’t sure which bits are the smallest, you can pick a [aawp link=”B00280MC9M” title=”Black + Decker drill bit set”] from Amazon, which helps you determine the correct size from the set of bits. It doesn’t cost much either – I think it’s less than 10 bucks.

Once you’ve made the small holes, the next thing is to color it black. This helps absorb sunlight to make the water warmer faster.

Finally, the next step is to attack the bucket with a pulley, then hang it somewhere above, either from a tree or a pole. Make sure the pulley is attached in such a way that you can easily adjust its height for refilling water into the bucket.

2. A Bucket and a Handheld Showerhead

If you are always on a tight schedule and don’t have much time for DIYing, or your DIY bucket solar shower has experienced some damages, then you can opt for a handheld showerhead.

This is rechargeable, portable equipment you can buy from Amazon. This means you won’t be doing much DIY. You just need a bucket (painted black) to heat the water.

The best solar shower head is the [aawp link=”B00IFHFJXI” title=”Ivation portable showerhead”], which is perfect for camping purposes. It’s designed to act as a homemade shower. And all you have to do is insert it on a bucket full of water and turn it on. It pumps the water through its piping.

You can hang it anywhere because it comes with hooks and a suction cup to attach to a wall. And the best thing about the solar showerhead is that you can charge it via USB, either on a laptop or on your car adaptor.

Also, you can use it indoors on a bathtub, especially if you live in an area experiencing power outages. It’s also the perfect choice when you simply want to save on electric bills – just leave the bucket outside for the sun to heat the water and carry it inside in the evening to take a shower using the showerhead.

Other than camping, the Ivation handheld showerhead is also a great option if you have pets that need constant cleaning.

Once again, this is an excellent idea if you’re always on the road. You can install a DIY solar shower on your car’s roof rack. Unlike the previous solar shower idea, this one involves step-by-step DIY instructions on how to build it.

The first step is to cut the ABS pipe into half using a hacksaw, to which you’ll attach the T-joint in the middle of the two piping sides you’ve just cut out.

Leave the setup to dry out for a few hours.

Once everything is attached, pick one end of the piping and drill two holes – for the spigot and the Schrader valves.

Attach the spigot, and make sure it faces downwards.

The next step is to attach the entire piping setup to your car. Attach it longitudinally from the front to the back. One end of the piping should be facing the front of the vehicle, and the other end facing the rear end.

If the car has a roof car, the tie-down straps will work perfectly. But if it doesn’t have a roof rack, it’s advisable to use a form block. Attach the foam block on top of the car, and then place the piping before strapping using the tie-don straps.

Once you’ve made sure the piping is firmly attached to the car, fill it up with water.

DO NOT fill it entirely. Leave some space for pressurizing the piping.

Use a bike pump (or an air pressure pump) to pressurize the piping setup.

Now attach the spigot with a hose that has a nozzle.

Finally, give the setup a try.

NOTE: Please don’t use the water for drinking, especially if you’re using PVC piping. This is because PVCs release leads when temperatures are high. And since you’ll be heating the water using solar, it’s best to keep away from ingesting the water.

Nonetheless, the ABS pipes are much safer than the PVCs, but it’s still safe to adhere to the safety measures. 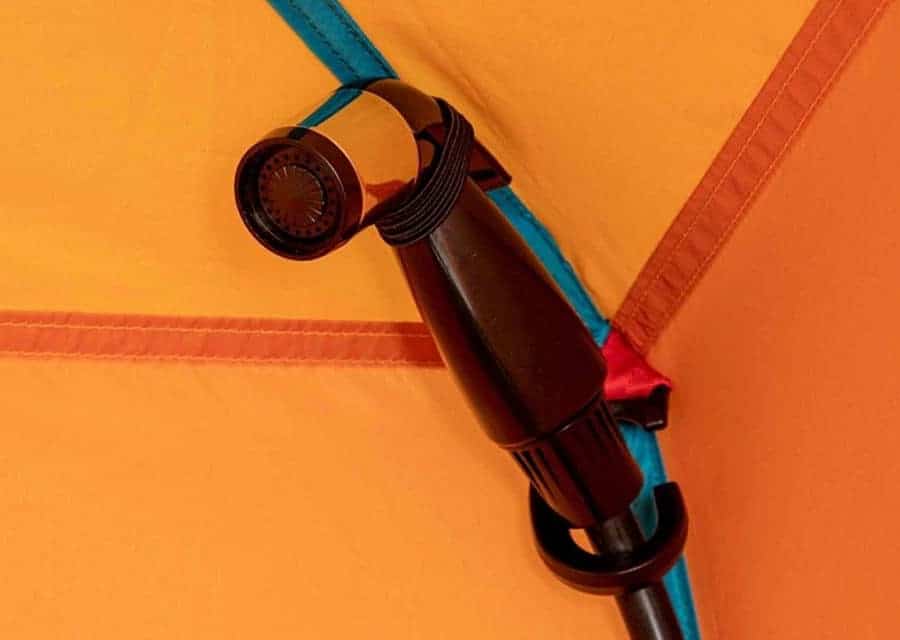 It’s a great shower idea if you love camping or you are always doing lots of outdoor gardening in your backyard. That is, you wouldn’t want to enter the house with dirty hands and feet. You can use the shower tent to clean yourself up beforehand.

Shower tents are simple to set up, and when folded, you can carry them with you anywhere you want. It’s best for camping, but as I’ve mentioned, it also comes in handy in other areas.

All you have to do is get one of these shower tents, and you’re good to go. The [aawp link=”B07PR2KFV7″ title=”Vidalido Portable Shower tent”] is a recommendable option.

The shower tent is not only easy to set up but also comes designed with a mesh window that lets you see outside. This is a great feature if you’re taking a shower in the forest and wouldn’t want a surprise attack from animals or something like that.

For bathing water, you can always use a bucket and the [aawp link=”B00IFHFJXI” title=”Ivation Handheld Showerhead”]. An alternative to the showerhead is using a 5-gallon shower bag. You just need to hang the shower bag on a firm and steady tree (or on a wall) and then direct the water inside the shower tent.

With these four (4) solar shower DIY ideas, you can pick whichever fits your needs. Apart from the roof rack solar shower plan, the DIY plans are easy and simple to complete. And they are cheap too!

None of these ideas cost an arm and a leg. They mostly average $10 or less. So good luck DIYing your solar showers.