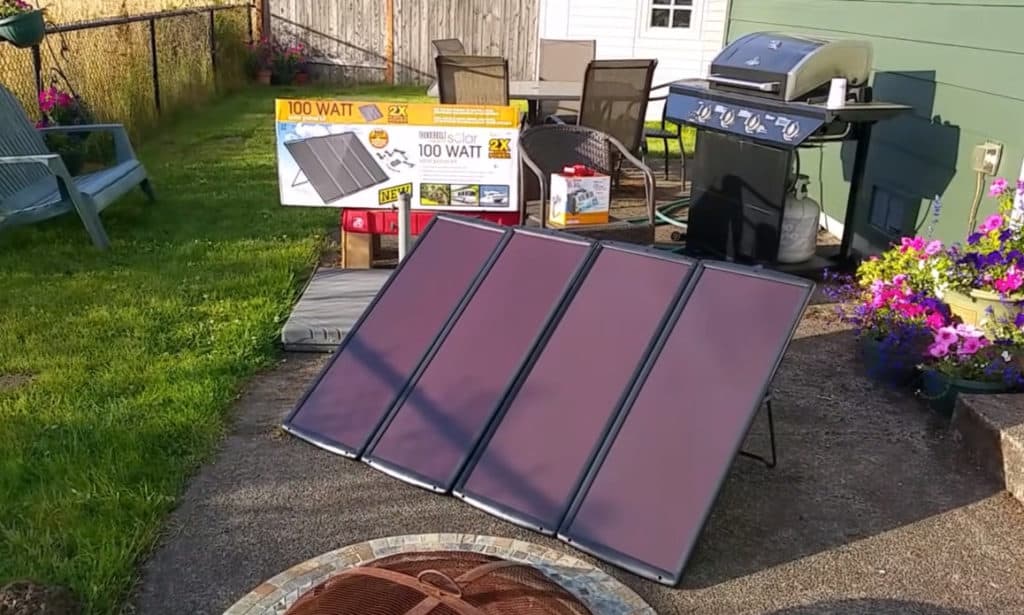 I’ve been looking for an affordable off-grid solar panel system for a while now. After doing a lot of research, I chose a Harbor Freight 100 Watt solar panel kit. I picked this model for a few reasons. I’d read good things about it, and it’s affordable and portable, all of which are important factors. And at 100 W, it generates a reasonable amount of power. I figured that a system that produces less power than this isn’t powerful enough to meet my needs.

If you’re interested in getting hold of this model, or indeed any off-grid solar system, then you’ll find information here in my Harbor Freight solar panel review to help you decide whether this system is for you.

I tested a Harbor Freight 100 Watt solar panel kit. This product is currently available on their website at just shy of $200. Note that this price doesn’t include two essential items; a 12 V battery and a power inverter. You’ll need the power inverter to convert the direct current DC electricity generated by the panels to alternating current AC power that you can use to power appliances in your home.

If you have a spare car battery, you can use this. Otherwise, a new battery will set you back about a hundred dollars. A 300 W power inverter, which is big enough for the job, costs around thirty dollars. So the total system cost was $330.

These panels ship with plenty of accessories, including a stand to support the panels and all the cabling you need. There is a simple solar charge controller that allows you to quickly monitor how much power you generate. The panels also come with Two LED lights, which are very handy for using the system on the road. There are even USB ports for charging your phones.

I set up and tested the system at home before taking it on the road to be sure I understood everything and that it was in full working order.

It took a little while to get everything in place and figure out which cable connected to what. But it wasn’t too complicated, and I quickly had the panels set up in my garden pointing at the sun.

I need these solar panels to fully charge my 12 V battery to power some LED lights and maybe some appliances like a TV and a fridge. So the big test of the system was to make sure that it generated enough power on a typical day to charge the battery fully.

The day I tested the system was sunny with a little cloud, here and there. I checked the charge controller a couple of times to ensure that everything was working okay and found that the panels were generating power, so I left them to it. When I came back eight hours after I set everything up, I found that the battery was fully charged.

So the system passed the basic test of providing me with a fully charged 12 V battery. Clearly, that’s just a sample day, but it’s a good enough start for me to be confident that these harbor freight solar panels will give me power when I head out into the country.

One of the reasons I bought this off-grid solar system was to learn a little more about how solar power works with a view to installing a permanent on-grid system in my home. It’s important to note that a budget solar system like these 100 W Harbour Freight panels won’t ever generate enough electricity to power your home.

12 V of power is enough to run lights, especially if you use LED lights and appliances like TVs for quite a while. What they don’t do so well on are power-hungry devices like home heating and air-con systems. This isn’t a drawback that this particular system; it’s just a point to help you understand what a small off-grid solar panel system can and can’t do.

However, if you want to use this as a backup system in your home during power outages, then it’s a simple exercise to connect several batteries, increasing your power bank. You can use a few car batteries or a more complicated system set up with more powerful electricity storage. Just bear in mind that you can expect this 100 W system to charge around one 12V battery per day.

Getting down to the nitty-gritty, let’s look at what I found good and bad about the product during this Harbour Freight solar panel review. 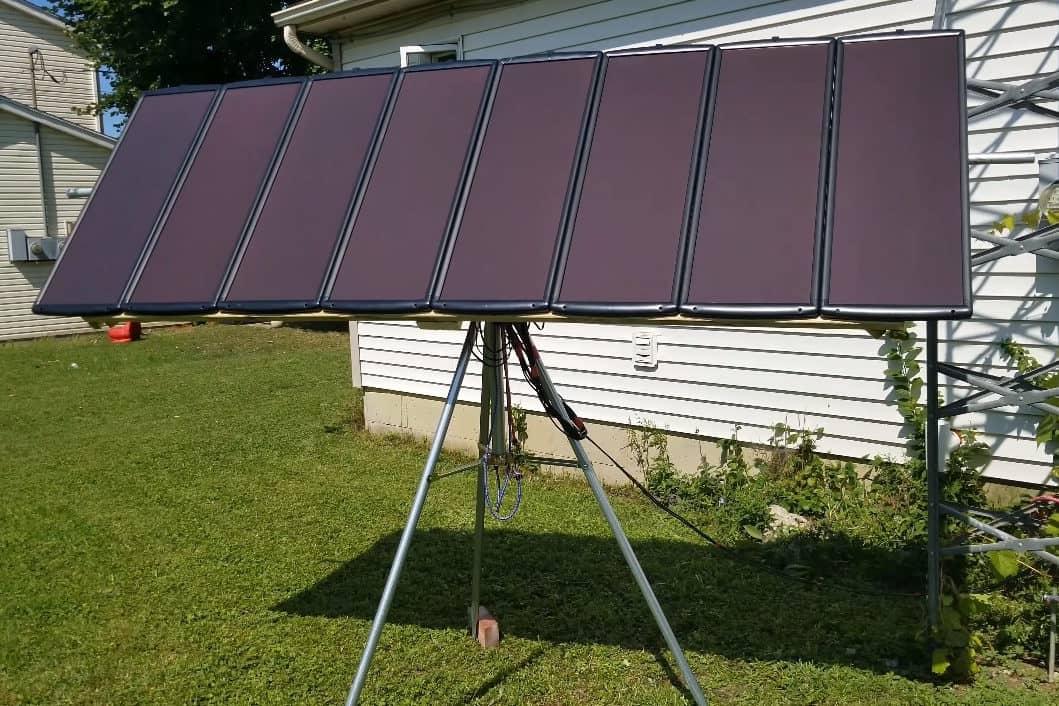 Price: You just can’t argue with a solar system set up for 330 bucks. At this price, you need to accept that this is an entry-level system and if it works well, then great. And it did.

Easy to set up: Even on the first install, I found the system setup user-friendly and intuitive. Everything plugged in pretty much where I thought it should, and it was simple to connect all the panels together and get the system running.

Portable: These Harbor Freight panels have been designed with mobile usage in mind. The whole system packs away into a manageably small space, and you can set it up in just a few minutes. The kick-out stand on the back of the panels isn’t the most sturdy of supports, and if I were using them in a permanent setup, I’d change this. But, it’s ideal for a mobile setup because it’s easy to change the angle of the panels to track the movement of the sun, maximizing power capture.

Did the job: I need this system to give me a reasonable amount of power to run lights and appliances when I’m camping or out in the country. I’m aware of the limitations of a 12 V battery.
I just wanted to be sure that this system could fully charge my battery in the day so I could use it at night. The solar panels charged the battery in eight hours, so they comfortably passed that test

A Bit Flimsy: If you want to use the panels as part of a permanent rather than a portable setup, you will probably need to make a few improvements. For example, the kickstands that support the panels, while ideal for easy setup and removal, aren’t strong enough to withstand heavy weather.

Similarly, some of the plugs and cables don’t look like they would withstand regular rugged usage. To be fair, though, this is an inexpensive system. If I decided I wanted to set it up in my home in a more permanent setting, it would be relatively straightforward to deal with these issues by upgrading a few cables and components and making a more rugged stand for the panels.

Amorphous Panels: The solar panels are thin-film amorphous panels. These are lighter but less efficient than the panels used in a typical home solar setup.

Since they are lightweight, they are perfect for taking on the road, but if you’re looking for a more permanent home solar solution, then you’ll want to consider getting heavier, more efficient panels. This isn’t really a criticism of this particular system; it’s just an observation so that you understand its limitations.

Separate Inverter and Battery: I can see why the battery and inverter aren’t included in the package since buyers might already own them. But I like to buy a product that will work out of the box without needing any other peripherals. It’s a minor point, but it would be great to get the whole package in one purchase.

Charge Controller: The charge controller’s main job is to tell you how much charge is going into the battery. I found this easy to do, but I was a bit confused by some of the other functions. These will probably become clear with further use, but they weren’t immediately apparent.

These 100 W Harbor Freight solar panels are an excellent entry point into off-grid solar power. This isn’t the strongest or fanciest system you can buy, but hey, at this price, would you expect it to be?

The panels do the job that they are designed to do. They are quick and easy to set up and use, and sturdy enough for the purpose. If you are looking for a cheap portable solar panel system, then I recommend this system. If you’re looking for a home system that generates a lot of power, then you need something different and a lot more expensive.

These cheap and cheerful Harbor Freight solar panels are perfectly suited to use away from home and are an excellent introduction to the world of free energy from the sun.

If you have any comments or questions, then please share them with us.